Versioning in our product comes in as a vital part to improve stability on what we deliver. Jscrambler Code Integrity acts directly on the applications’ source code, making it essential for us to leave the transformed code’s functionality untouched when comparing it with the original version. That being noted, we work towards having a “stable” version of the product and a “latest” one, giving the users the possibility to test the newest features and report any issues they might face. So, users have the possibility to select which version of the product they want to use. By default, users will always be using the stable version, regardless of its number.

This is the default and thoroughly tested version, it won't receive any feature updates until the next release. Only major bug fixes and security updates will be sent to this version, with the goal of improving stability without compromising functionality.

This is the current version we are working on, being in a pre-release cycle. New features will be released here, as well as all fixes that might impact the core protection stability, UI bugs and edge cases. Even though we are very demanding with the quality of what is available to the users, due to the nature of our product, new features might break some functionality.

Any version prior to the current stable version. These won’t receive any feature or security-related updates. Still they might be helpful whilst one is still migrating to the newest stable/latest version.

By having multiple versions, users may opt to use a specific version or either use the stable or latest version (regardless of their number). The version can be selected in your settings.

The number of available versions may vary over time.

Users can lock their version and will always use it while it is available, even if it becomes a legacy version. Over the time, legacy versions will stop being available. In order to ease the process of migrating to newer versions, we will contact users before this happens and give time for testing and reporting issues on the most recent versions. Finally, when this version is no longer available the user will be automatically migrated to the current stable version.

To select a version of the Application, login into your account under https://app.jscrambler.com, head to “Settings” and, at the left of the screen, above the API credentials, you'll be presented with a drop-down menu to select the version. Currently, users can choose to always use the stable or latest versions, and besides that, they can lock to a specific version by selecting the version number. 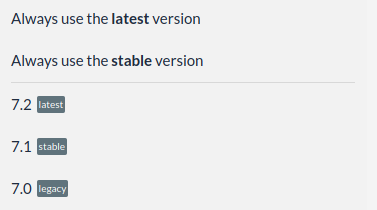 Similarly to the Application, a user is able to select the version he wants on the Documentation page, by changing it on the header bar. When visiting the page for the first time a user will see the current stable version.

At any time, users can check the updates done on each version heading to the Changelog.

Using any of our API Clients users can equally specify the version they want to use by setting the jscramblerVersion option. Any of the available versions can be specified, by inserting the version number (e.g. 7.1, 7.2), “stable” or “latest”.